1826 – Led by Willoughby Barton, a state legislator from Mobile, the state establishes the Board of School Commissioners of Mobile County, the state’s first public school system.

1830 – School commission buys an entire city block on Government Street as a site for its future school.

1830-1836 – The commissioners have difficulty raising money to construct the school. Eventually the state legislature allows the commission to raise funds through a lottery. By early 1836, they have $50,000 in lottery funds, a $15,000 municipal loan and some private donations, including a large private donation from local millionaire Henry Hitchcock.

1836 – James Gallier Sr. and brothers James and Charles Dakin are selected as the architects. They work simultaneously on Barton and Government Street Presbyterian Church.

1852 – After more than a decade on a semi-public plan, the commission reorganizes and reopens Barton as a true public school. Barton becomes the model for Alabama’s public school system.

1899 – Barton is expanded with wings on the east and west sides.

1934-1937 – Barton is surveyed by the Historic American Buildings Survey, resulting in a large collection of photos and drawings maintained at the Library of Congress.

1970 – Barton is added to the National Register of Historic Places.

2005 – Barton Academy is named to Alabama’s "Places in Peril" by the Alabama Historical Commission and the Alabama Trust for Historic Preservation.

2007 – The school board relocates its central office to West Mobile.

2012 – Barton Academy Foundation is incorporated as a 501(c)(3) non-profit organization. The foundation’s mission is to assist the school system in raising awareness and funds to create Barton Academy for Advanced World Studies as an innovative educational institution and an engine for growing Mobile’s economy.

2013 – The Mobile County Public Schools allocates $3.5 million from its $100 million construction bond for repairs to the exterior of Barton Academy.

2015 – Mobile County Public Schools completes a $4.2 million exterior
renovation – renewing every surface from the fence to the top of the dome.

Prepared for the Future

Eligibility Requirements:  Must reside within Mobile County Public Schools' attendance zone.  Admittance will be based on an application and lottery process within the MCPSS Magnet Program.

Applications typically open in the fall and spring for the following school year enrollment. 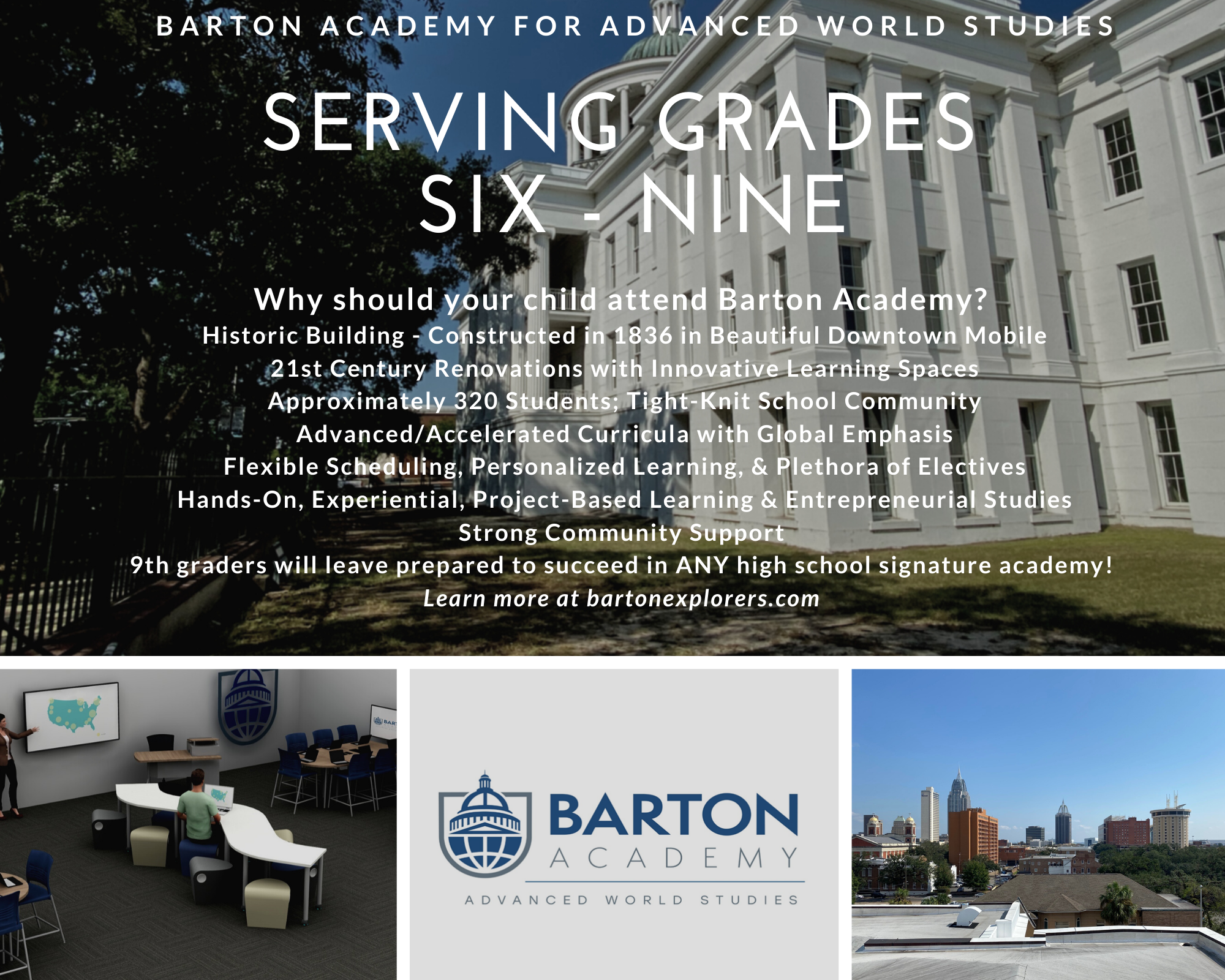